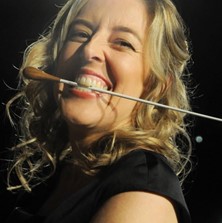 Aleta King is director of Avondale Conservatorium, senior lecturer in musicianship and conducting, and artistic director and conductor of Avondale choirs and orchestra at Avondale University. A former lecturer in musicianship at universities of Queensland and Melbourne, and accompanist for Queensland Conservatorium Chorus, Aleta regularly presents for Australian Society for Music Education, Kodály Music Education Institute Australia, Australian National Choral Association and Music Teachers Association. During her studies at the  Liszt Academy’s Kodály Institute, Aleta received the Sarolta Kodály Foundation Scholarship, the International Kodály Society Sarolta Kodály Scholarship and the Hungarian Government Scholarship. As musical director of the London Adventist Chorale, Aleta had the experience of performing for Her Majesty Queen Elizabeth II at the Golden Jubilee celebrations at Buckingham Palace.  Aleta recently completed her Doctor of Musical Arts in Conducting at the University of Sydney where she also conducted the Conservatorium Orchestra and Choir and served as Assistant Chorus Master to the Conservatorium Choir and Chamber Choir. Aleta presented her doctoral research for Oxford Conducting Institute’s International Conducting Studies Conference (OCIICSC) at Oxford University In 2016 and 2018. She was part of the organizing committee for the third OCIICSC hosted by the University of Sydney in 2019. As Australian National Choral Association’s Inaugural Research Chair Aleta is the conference convenor for ANCA’s inaugural research conference in April 2022.

1. Demonstrated personal teaching and musical excellence
Over the past 25 years Aleta has consistently demonstrated a personal commitment to achieving teaching and musical excellence in her professional career as a musician and music educator. Aleta’s very personal commitment to excellence in all she does as a professional is evidenced in her impressive international career that spans continents and countries and includes a royal command performance for Her Majesty Queen Elizabeth II’s Golden Jubilee Celebrations at Buckingham Palace, London, England. For access to Aleta’s Curriculum Vitae as supporting evidence see link: Aleta King CV March 2022.doc More recently Aleta’s personal commitment to a lifetime pursuit of excellence in professional best practice saw her pursue doctoral studies in conducting at Sydney Conservatorium in 2015. Aleta graduate with a Doctor of Musical Arts in Conducting from The University of Sydney in December 2021.

2. Demonstrated contribution of work to Australian Kodály-inspired music education and/or the Kodály Australia community
Since her return to Australia in 2005, Aleta has been unfailingly consistent in her professional commitment and service to the Kodály Music Education community in Australia. This is evident through:

a) Her involvement as a member of KMEIA National Council in various roles.

b) Her role as an educational consultant for musicianship and conducting during recent revisions of the Australian Kodály Certificate.

c) her attendance as an invited guest presenter for every KMEIA national conference event since 2006.

d) her accreditation as a lecturer in musicianship and conducting for the Australian Kodály Certificate since 2006.

e) her involvement as musicianship and conducting lecturer for the annual Brisbane International Summer School Program since 2006.

f) her involvement as a musicianship and conducting lecturer for the annual NSW Autumn School and Winter Schools in Sydney since 2013. Aleta took up her appointment as Director of Avondale Conservatorium at Avondale University in 2012. That same year she also implemented a new Kodály-inspired musicianship program. At the end of 2015 the first music education students to go all the way through this new musicianship program graduated as primary and secondary music educators. In the spirit of best practice it was Aleta’s desire to somehow capture the essence of the musicianship experience from these first graduates in particular, and for the benefit of those students that followed after. The title of Aleta’s doctoral thesis is ‘Conductor as Musicianship Mentor’. Aleta was very keen to choose a doctoral research topic that would enable the alignment of her professional expertise and experience in musicianship and conducting in particular. Aleta’s doctoral research enabled her to examine best practice in her role as conductor and musicianship mentor. This research topic gave Aleta the ideal opportunity to reflect upon, research into, and write about the conductor as a musicianship mentor in a Kodály-inspired musicianship program in the context of an Australian higher music education institution. For access to Aleta’s doctoral thesis ‘Conductor as Musicianship Mentor’ as supporting evidence please see link: https://sydney.primo.exlibrisgroup.com/permalink/61USYD_INST/1c0ug48/alma991032162008005106

a) This research topic has also given Aleta the perfect opportunity to publicly represent Australian Kodály-inspired music education and the Kodály Australia community through her attendance at national and international conferences in which she has presented her research findings over the past 6 years eg. KMEIA National Conferences in Brisbane (2016) and Perth (2018), Australian Society for Music Education (ASME) National Conference in Melbourne, Australia in 2017. The Oxford Conducting Institute’s International Conducting Studies Conference in Oxford, England in 2016 and 2018.

b) The demonstrated impact of this research is ongoing and will be evidenced further through Aleta’s intention to publish the results of her work in a series of journal articles, a book chapter(s) and/or a book.

4. Potential model for others:
Upon reflection, Aleta can now look back and say that perhaps the most important aspect to come out of of her doctoral research is the personal mentoring aspect to what she does as an experienced musicianship educator and conductor. Reflecting forward she can now say that mentoring music education students who will one day become tomorrow’s music educators is the thing that gives this whole doctoral research project authenticity and real meaning to her personally and professionally. As someone who is officially more than half way through her professional career the concept of legacy is becoming increasingly more important to Aleta. At the beginning of one’s professional career it is all about achieving teaching and musical excellence. At this point in her career Aleta is more concerned about creating a music education legacy through her students so that they can continue the work long after she is gone. Legacy between teacher and students is something that Aleta is absolutely committed to both now and into the foreseeable future