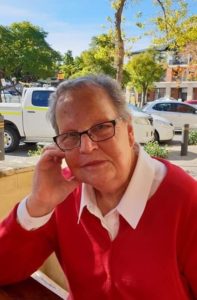 Incredibly unique, extreme perfectionist, the consummate professional and lover of music – these are some of the phrases that encapsulate Sally Christmass. To coin a phrase, ‘Sally always did it her way’. People who have worked with Sally Christmass, whether they be teachers, students or parents respected and were in awe of her musical talent, knowledge, enthusiasm, and genuine thoughtfulness and kindness.

One of Sally’s greatest attributes is that she possessed the ability to teach students of all abilities, never compromising on the ideal of ‘music for all’. She nurtured and encouraged excellence in her classroom and choral programs. During her twenty-one-year tenure at Kelmscott Primary School Sally’s high standards were never compromised. Everyone was carried along the journey through her indomitable charisma.

Sally began her teaching career with the Education Department of Western Australia after completing her teaching qualifications at the Claremont Teachers College. She was employed as a classroom teacher completing service first in the south-west, before working in a selection of schools in the metropolitan area.

Sally was a generalist classroom and music specialist at Kelmscott Primary School from 1977-1998. She taught music with her Year 6 class in 1977 and 1978,  with the class becoming her first choir at the school during this time.

In 1979 Sally was informed by the principal at the time that she would become the first music specialist at the school, responsible for teaching Music to students from Year 1 to Year 7.

This time was one of professional growth and learning for Sally, as this was the period in which she was first exposed to the philosophy and pedagogy of  Zoltán Kodály – it was through Joy Woodley that Sally was first introduced to Deanna Hoermann, and the ground-breaking work she was completing at this time.

As a result of this work the curriculum at Kelmscott was transformed to reflect the new knowledge that Sally had attained. The ABC song books and recorders were replaced with lessons in which students were engaged in their learning while singing, reading and playing music in exciting ways.

But central to these experiences was a pedagogical foundation of learning that was logical, developmental and sequential.

The success in classroom at the school was also being reflected in other aspects of the program. The Kelmscott Primary School Choir really began its journey of being one of the best Primary School choirs in Western Australia. The choir began with 57 students and it never got bigger than 80 students as, ‘this was the maximum number a single bus of the time could carry.’

An event that was a momentous occasion in the choir’s varied history was their performance at the 4th  International Kodály Symposium, which was held at the Sydney Conservatorium of Music in 1979.

The choirs at Kelmscott Primary School continued throughout the 1980’s and 1990’s to aspire to excellence and produced musical work of the highest calibre, whether performing at the local Kelmscott Agricultural Show or singing at St George’s Cathedral at the funeral of the West Australian Governor, Professor Gordon Reed.

Sally’s musical passion also ensured that instrumental music was a celebration at Kelmscott Primary School, and her long-standing relationship with the Education Department’s School of Instrumental Music Program culminated in the 1990’s , where Kelmscott’s students played the most instruments of any West Australian government school.

The Kelmscott Primary School Music Program was considered best practice by people within the Education Department. Therefore, it was no surprise when the Armadale District Education Office approached Sally to help disseminate key information regarding the teaching of music to other metropolitan schools. This resulted in the publication of a series of books which were titled Sing for Joy, for use within the primary music classroom.

Sally’s influence on choral music and choirs in general is significant and cannot be undervalued. Her impact on music education in Western Australia is incalculable. She has been an inspiration to all teachers and students who have had the privilege of working with her, or who have been taught by her. Sally’s humble persona, great sense of humour and unique individualism made her a very special ambassador for educators.

She will be viewed when the history of Kodály in Western Australia is written as a torch-bearer for all who have followed her.