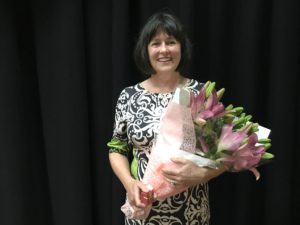 Hélène Matters has made an enormous contribution to the leadership and management of the Kodály Music Education Institute of Australia Incorporated over several years, and as well has been an international leader and advocate for Kodály-based music education. Hélène is one of those special Australians whose contribution to Kodály-based music education and system development has been international.

There are now a number of Australian music educators who have been internationally active and recognised as significant music leaders and educators in this field.  Hélène has made her mark with distinction in the field of Kodály-based music education in both Australia and the USA.

In Australia, Hélène served as a member of the KMEIA National Council from 2012 to 2016. During that time she was the National Vice-President 2012-2014, and was a significant, impressive and very successful Convenor of the National Council’s Finance and Strategic Planning Committee 2012-2016. Hélène led new directions for administrative and financial management and current and future planning. The appointment of a National Administrator was an achievement of Hélène’s period of administrative and financial leadership.

Hélène is also an accomplished pianist and accompanist, an excellent school music teacher and a tertiary music lecturer and researcher. She is active as a choral conductor, composer and arranger, and is highly experienced in musical analysis and transcriptions.  Hélène has also had a stellar career as a renowned music educator in an incredibly broad range of music disciplines and institutions:

In Australia Hélène has been a primary school music specialist teacher in Queensland (1987-1997), a part-time music education lecturer at Griffith University Brisbane, Qld, and a Lecturer at the Cuskelly School of Music, Brisbane (2012-2015 and 2017-2018).

In the USA, Hélène has been a lecturer at Holy Names University (HNU) in California USA, teaching piano and lecturing in musicianship (2002-2005), Interim Director of Music, Holy Names University (2003 -2005), Co-Chair of the National OAKE Conference, San Francisco, California 2004, a lecturer at the Kodály Summer Institute, HNU, CA USA in Pedagogy, Practicum, Folk Music, Musicianship, Conducting (2013), and also a lecturer at the Kodály Summer Institute, Conservatory of Music, Puerto Rico, Musicianship and Conducting (2013).

Within her professional interests Hélène also been the Director/Founder of an a capella women’s ensemble (20+ years in Brisbane), has been a singer with a wide variety of choral groups, has transcribed folk songs from early recordings held in the Library of Congress, and advocates for choral groups.

Hélène lives in both the USA and in South-east Queensland, Australia.